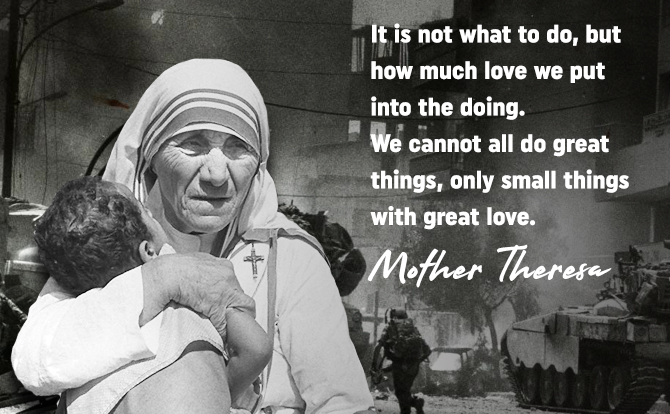 Something Beautiful for God

Each class in a primary school was asked to choose a person who had faithfully followed the Lord Jesus to make a redemptive difference in the lives of others. During the year, the students would have the opportunity to tell this story.  Year 4 chose Mother Teresa and here is her story…

Few have embodied the mission of Jesus as sublimely as Agnes Gonxha Bojaxhiu, born in Macedonia (1910 – 1997), better known as Mother Teresa. At 18 years of age, she joined the Sisters of Loreto in Ireland. After taking her vows as a Catholic nun, she taught in a secondary school in Calcutta, India. In 1946, in the midst of the widespread suffering and poverty around her, she received a ‘call within a call’ and she opened a school for slum children, relying on volunteer and financial support. Two years later she was granted permission to start her own order, with the mission to care for the homeless, those rejected and uncared for by society, the lepers, the blind and the disabled – those shunned by everyone.

The order she commenced began with only 13 sisters and came to be known as the Sisters of Charity. It now numbers 4000 nuns who care for the underprivileged, disabled and disadvantaged through AIDS hospices and charity centres around the world. Mother Teresa’s life of service provided people the opportunity to die with dignity. Calcutta’s Home for the Dying allows “people who have lived like animals to die like angels – loved and wanted”. She passed away on 5 September 1997 and her life witnessed to Jesus’ love expressed to those who had no capacity to repay her compassion.

How did the students respond to their exploration? They learnt “We cannot all do great things.  But we can do small things with great love.”

The class wrote and acted out a drama about Mother Teresa’s life at a presentation night. Students were challenged about their own attitudes to the materialism of the surrounding culture and how they might show the sacrificial love of Jesus to the poor and lonely in practical ways and this was later expressed in their service activities.  They had encountered the sweet fragrance of a life lived for Christ just as many years earlier the famous journalist Malcolm Muggeridge visited Calcutta and said “when the train began to move, and I walked away, I felt as though I was leaving behind all the beauty and joy in the universe…” (Muggeridge M. (1971) Something Beautiful for God p. 17)

“… live a life of love, just as Christ loved us and gave Himself up for us as a fragrant offering and sacrifice to God.” (Ephesians 5:2)